The UBC Bachelor of Midwifery degree (BMw) prepares students to perform essential midwifery skills after graduation. The curriculum is built around the Competencies of Registered Midwives published by the British Columbia College of Nurses and Midwives (BCCNM), and prepares graduates to write the Canadian Midwifery Registration Examination (CMRE).

All Midwifery courses with the prefix MIDW are restricted to students registered in the Midwifery Program. Candidates must complete two prerequisite courses, BIOL 153 (Human Biology) and WRDS 150 – Writing and Research in the Disciplines (Formerly ENGL 112 – Strategies for University Writing).

All courses are available in classrooms in Vancouver and at Victoria General Hospital. During the first year, students may apply to study via video-conferencing through the Distributed Option in Midwifery Education (DOME). DOME students will travel to Vancouver at least twice a year in Year 1 for intensive in-person coursework. All students are able to participate in coursework by teleconferencing during years 2, 3 and 4 when students are in clinical placements around British Columbia.

Students will be required to complete a number of clinical placements in Years Two, Three, and Four, with at least one placement in a rural setting.

Upon completing the program, students meet the BCCNM’s registration requirements for active practice as set by the BCCNM.

MIDW 104 (3) Lactation and Infant Feeding for Maternity Care Providers (Formerly Lactation Consultation for Maternity Care Providers)
Breastfeeding physiology, pathophysiology, and strategies for support of the dyad based on best-practice principles. Discussion of major Canadian and international initiatives for the support and protection of breastfeeding.
MIDW 108 (5) Theoretical Foundations for Midwifery Practice
Scope of practice of a midwife, regulatory framework, skills for basic midwifery practice. A series of lectures and clinical lab sessions.
MIDW 115 (3) Research Methods for Midwives*
Research designs used in midwifery research, types of studies reported in the midwifery and health care literature, research methodology and basic principles of epidemiology, biostatistics and social research. *Students with a demonstrated background in research methodologies and practice may be granted an exemption.
MIDW 120 (3) Midwifery and Social Justice
Explores a variety of social justice frameworks and issues that arise in midwifery care, and engages students as active participants in knowledge-production.
MIDW 125 (3) Pharmacology for Maternity Care Providers
An overview of basic concepts in pharmacology, pharmacy, and therapeutics relevant to the practice of midwifery in Canada.
UBC Health Integrated Curriculum Modules and Discussions
https://health.ubc.ca/collaborative-health-education/integrated-curriculum

MIDW 350 (4-12) Inter-Professional Placement*
Opportunities to explore health professions that partner with midwives to care for childbearing families within the province.

MIDW 380 (10) Midwifery in Special Contexts
Clinical course providing the opportunity to study midwifery in contexts beyond those usually offered by the program. Students select a context and provide a rationale for how the context will enhance their learning. This course is not part of the required curriculum. Students must attain permission from faculty to register for this course.

MIDW 435 (4) Comprehensive Midwifery Theory and Practice
In-depth review of the theoretical principles and evidence basis for comprehensive midwifery care. Tutorials carried out in an online live classroom setting.
MIDW 440 (13) Clinical Clerkship
Students assume a primary care role in clinical placements in midwifery practices across the provinces. Demonstration of independent decision making and application of the full range of their academic knowledge to professional practice. A practicum under the supervision of a registered midwife.

Key principles are integrated throughout each activity (shown in the outside circle of the diagram). Integrated topics are delivered in an order that makes sense and builds learning across sessions. The integrated curriculum is designed to ensure interprofessional learning is not an add-on, but a meaningful, required component of students’ programs. 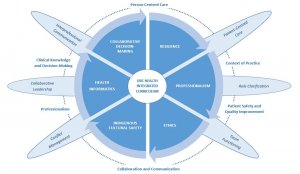