This summer the UBC Midwifery Program arranged for midwifery students and clinical faculty to participate in a two-part workshop to learn about plants useful for midwifery practice. It was an experience rich with culture and joy. 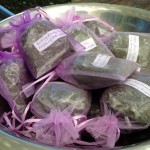 Our day began with an extended time of introductions immediately followed by a smudge, a purification ceremony to invite health to our bodies using local cedar. Dr. Lee Brown joined us, and after revealing his own history as a midwife for his community, he introduced us to the tobacco plant. Though most westerners know the tobacco plant primarily as a component in cigarettes, tobacco was traditionally used in prayer as an offering of thanksgiving to the creator whenever plants were harvested from the earth. (Note: Each row of the IAH Garden is planted with a tobacco plant in honour of this practice, and in honour of the tobacco itself.) We were each given a pinch of dried tobacco and individually set out to offer our own thanksgiving for the medicinal plants we hoped to procure that day. It was a memorable start to the workshop.

Through the process of generating a list of medicinal teas pertinent to midwives, First Nations Elder Jeri Sparrow generously shared her medicine-making knowledge. I enjoyed watching her navigate this process. Someone would say, for example, “I’m interested in a tea that will help me with such and such…” Jeri would respond, “yes ok, we’ll need to gather x and y, and you know I think we should gather some z…” calling out the names of both familiar and unfamiliar local plants. She sprinkled the conversation with stories that revealed her years of learning.

Finally, we dug in. Armed with scissors, knives and paper bags we set out in pairs to collect leaves, roots and flowers for future medicinal teas of all kinds – teas for headaches, teas to prepare the uterus for labour, teas to help midwives fall asleep after the high of being at a birth! After about an hour of collecting bags and bags of foliage, each of us was sent home with instruction to dry our plants and to bring them back the following month for part two of the workshop.

Over the course of the four weeks that yarrow and valerian hung in my apartment, I watched the plant leaves shrink in size and enjoyed as their scents filled my place. At one point a few leaves fell to the ground. Usually I would look at dead leaves on the ground and think nothing of sweeping them up; this time I saw not only my harvesting labour lying there, I saw valuable medicinal tea! I picked them up, dusted them off, retied them to the drying hanger and found myself absolutely committed to not letting those leaves die in vain! As Jeri had said, “As we work with the plants, we grow in relationship with them…”

I came away from the workshop well aware that I have a lot to learn in this area. I also came away encouraged that in the Aboriginal style of learning, I begin by getting to know one plant; that seems doable. I think I’ll start with the raspberry plant…

Being a student midwife often means beginning or ending activities at unusual moments. Abrupt ends to personal phone calls, rescheduling my children’s activities, or maybe even leaving a cart of groceries mid-shop, so I wasn’t overly worried when I could only make it to Part 2 of the tea harvesting and blending workshop. I picked up what I could, and hoped to learn the rest later.

When I arrived, my classmates were ready to grind up their harvest, taking care to avoid the thorns of the raspberry leaves, while delicately gathering back some the escaping leaves. We started the day with a group check-in, and each student shared how much she enjoyed hanging these herbs and leaves in her home to dry, and also how her relationship to plants and dirt had slightly changed because of it. One student explained that her usual response to leaves and dirt is to sweep them up and throw them away without much thought. But when a drying leaf would fall from the harvest, she found herself feeling protective of the plants, and a different type of relationship beginning. 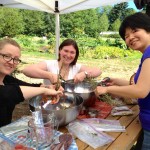 Jeri handed us each a tiny pinch of tobacco, explaining that although tobacco is used traditionally by the Plains People, and is not Haida medicine, we all learn from each other. We offered thanks to the Musqueam people for allowing us to work on their land, and began to grind and blend.

I found the activity calming. We shared stories about the herbs and our lives while blending. We talked about the properties of plants, and Jeri shared her path of learning traditional medicines. She had a foundational experience that directed her commitment to learning traditional medicine from her elders. She learned one or two plants well, and from there slowly accumulated her knowledge. This, to me, echoes our path to midwifery. We all have a story about one birth or one experience that led us down this path, which set a foundation and a commitment to helping women birth. One by one we gather more births, and we learn from our Midwifery elders, both the evidence and the anecdotes. Building on this foundation we learn variations, while hopefully retaining our strong commitment to normal birth and the traditional wisdom of women’s bodies.

This day, we made 6 different tea blends. Initially, we added all the plants together in a large stainless steel bowl, in specific ratios, but each tea sachet ended up with slightly different properties. I enjoyed this careful “unperfect” measure, some having more lemon balm, others more nettles. We blended some teas for pregnant women, but also for ourselves as care providers, who sometimes neglect self-care during those long, sleepless nights. Jeri talked about each plant, and I clearly remember how she treated valerian root, with a sort of cautious respect. By the time we finished blending and smelling it, we were all kind of giddy and spacey, losing count of the number of sachets we were making and which teas were which!

The day was also personally important. I found out on my way to the farm that I had just lost a childhood friend to an aneurysm, and in a state of shock, I just continued driving to the farm, and I’m glad I did. Connecting with plants and the earth and sun is grounding for me. It can connect us to all that has come before, the conditions that led up to this moment, and can help us to set an intention for the harvest to come. In my shock, I found time to stop and breath, to blend medicines into teas that bring health and comfort. And that day we made a “Soothing Tea” which was a mixture of rosehip, motherwort, chamomile, milky oats, valerian root, St. John’s wort and skullcap. I drank quite a few cups after that day, and when I wasn’t sure how to support the mother of my friend in her profound grief, I brought her some tea and blended plants. I hope they helped.

I want to thank Jeri Sparrow, the Musqueam people, and the UBC Midwifery program, who afforded us this special opportunity. It was a rare and calm treat in the middle of a hectic professional program.